Kyaga et al’s 2011 study “Creativity and mental disorder: Family study of 300,000 people with severe mental disorder” is one of a long list of studies finding creativity to be associated with mental illness. Some authorities (such as Andreasan and Canter 1974, or Jamison 1989) refined this adage to identify psychopathology being particularly prominent with the highest achievers in creative art. Rather than dive into the dehumanising debate that genius is merely madness, it creates some solace in considering that mental illness may have some form of role in society, that its sufferers nonetheless have a potential outlet for self-actualisation. It also gives us license to look at interesting pictures. 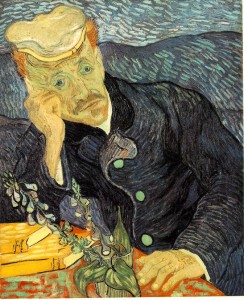 The “Portrait of Dr Gachet” by the singular Vincent Van Gogh has a fair amount of mystery behind it. It obviously merits a look by us due to its artist having well-described melancholic depression; it’s significance increases when one is aware that it was only a few months after this painting was completed that his suicide was thought to have happened. It presents clearly a number of features of melancholic depression – the weakened posture with head in hands, Darwin’s 1872 Omega sign, the sense of preoccupation and distant focus. Then one remembers that this is a picture, not of Van Gogh, but of his clinician.

Van Gogh reportedly had a poor opinion of his psychiatrist/homeopath, declaring him in a letter to his brother Theo “sicker than I am”, but later claiming to his sister Wihelmina “I have found a true friend in Dr Gachet, something like another brother, so much do we resemble each other physically and also mentally”. Notably several other photos and pictures of Dr Gachet from around the time picture an individual significantly more plump and active than the above. The assumption by much of the art world was that Vincent simply projected his own depression onto his clinician when providing this portrait, but this means more for us as clinicians – do our patients, those with whom we believe we have excellent rapport, in reality project their sufferings onto ourselves as a means of normalising their experience? And if they have such a perspective, how much of that is due to their illness, and how much do we encourage by our presence?

The colours are striking in the precision, as classic with all Van Goghs, and much has been made of the excessive depiction of foxglove at the front. Contrasting with the bright yellow books, the assumption has been the cardiac applications of digitalis by a physician as explaining its role. Others point to its known toxicity as a harbinger of eventual suicide. Digitalis was also often used in the 19th century for the treatment of delirium tremens and mania, and in seizures (which Van Gogh suffered from). All these explanations are unsatisfying, which probably points to the longevity of the painting.

Francisco Josè de Goya y Lucientes endowed the late 1700s and early 1800s with fantastic expressive works. A Spanish painter,  Prateria di San Isidro (1788) is a beautiful rendition of a festive scene at San Isidro – bright pink umbrellas and distant beautiful waterscapes, his work is singular not just for its extensive range but also its classification, as Goya’s work is usually defined as pre and post “illness”. In late 1792, the first symptoms of a mystery illness started with headaches, dizziness, tinnitus and hearing loss. There were problems with his sight, and paresis in the right arm. Depression followed, together with horrendous hallucinations. Neurosyphilis or heavy metal poisoning have been implicated in his experience, but when he rendered San Isidro again 30 years later, there weren’t too many pink umbrellas:

This period is also associated with arguably his most famous rendition, “Saturn devouring His Son”. The starkness of the image creates that deep sense of internal devastation that Goya was doubtless enduring. 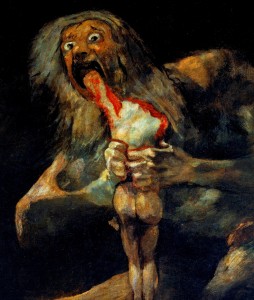 To continue with Van Gogh’s theme, we have another painting by an artist depicting his clinician assisting him in his mental ailment – “Self-portrait with Dr Arrieta” in 1820. The contrast is clear in the depiction of the individuals – with providing this as a gift of thanks to the clinician who aided him, the sense of hope and positive portrayal of the good doctor is clearer, even amongst the darkness and the shadows that surround them. 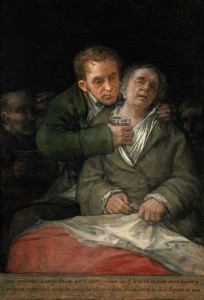 The last artist in this exploration, Edvard Munch, provided a rendition of the “genius inspired by madness” trope that is almost caricature, he experienced high levels of anxiety, even writing in his diary “My fear of life is necessary to me, as is my illness. They are indistinguishable from me, and their destruction would destroy my art.”. The Scream, his most famous work, is related to this. He described later regarding his inspiration, “The sun began to set – suddenly the sky turned blood red…I stood there trembling with anxiety – and I sensed an endless scream passing through nature.” This is sometimes interpreted as a hallucinatory experience associated with animal cries from a slaughterhouse in close proximity to a mental asylum. It has also been interpreted as a coincidental viewing of a sunset at the same time of a large volcanic eruption in Krakatoa that created red twilights in Europe from November 1883 to February 1884. Both interpretations have their merits. 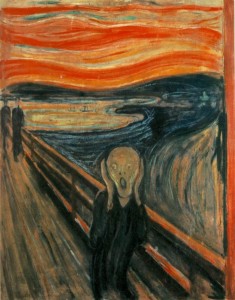 Fortunately Munch made resolving the inspiration for another piece of “psychiatric art” significantly easier by simply titling this 1894 expressionist piece, “Anxiety”, even if he did cheat by copying the sky from before. 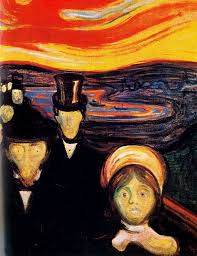 A reassuring end to this is that Edvard Munch is one of the few artists who appeared to show some level of recovery from his illness, particularly following a hospitalisation in 1908.

The ability of mental illness to evoke such incredible works should not come as a surprise to us, who daily witness incredible feats of endurance by the afflicted to manage assaults on their humanity. The presence of these works however serve more to remind us that not all suffering is meaningless. It is an important lesson for our patients, and for ourselves. Psychiatry is, after all, an art as well as a science, in more ways than one.