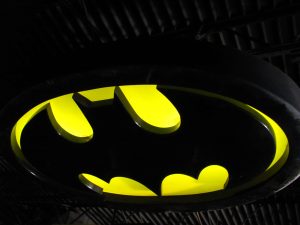 In the trailer for the upcoming Suicide Squad, the newest blockbuster comic book movie, Margot Robbie (playing supervillain and former psychiatrist Harley Quinn) announces to a crowd of apprehensive prison inmates that her hallucinations are telling her to kill everyone around her and escape. “Just kidding,” she demurs, “that’s not what they’re really saying.”

It’s a scene played for laughs and part of the darkly comic tone of the series on which the movie is based. It is also surprisingly open in its portrayal of psychiatrically disturbed individuals inflicting gleeful remorseless violence on the world around them. However, this is well in keeping with the entire Batman universe, which is where the majority of these villains originate. Batman villains roster boasts a surprising number of mentally ill adversaries. Less than half of them on defeat are temporarily banished to any forensic facility, the vast majority return to their wards in Arkham Asylum. Dr Harleen Quinzel is not even the only mental health practitioner turned insane sparring partner – other fictional dubiously credentialed characters include Dr Jonathan “Scarecrow” Crane, and Professor Hugo Strange. The nihilistic Victor Zsasz was named after real infamous psychiatrist Thomas Szasz, after his writer glimpsed the name in a library.

What are we supposed to make of such exaggerated caricatures of mental illness? The Harley Quinn scene on its own, while it may cause offense, can be argued within tone and context to not be deliberately offensive. The character herself is not considered to truly have schizophrenia, merely to be exploitative and impulsive. However, she is part of a lengthy fascination that the franchise has had with mental health, which is overwhelmingly negative. The British Journal of Psychiatry published an overview in October 2011 which found a “damning portrayal of psychiatrists” and “tacit references to the anti-psychiatry movement”.

The situation therefore is not the old bugbear of using mentally ill people as cinematic bogeymen, but an entire running series of stories over several decades constantly using mental health as the dark miasmic pit from which the demons emerge. It possibly made some sense in the pre-1960s, with success rates for mental health treatment being depressingly low and asylums truly being the horrific imagination-inspiring recesses that they were portrayed as. But the pharmaceutical revolution and the movement from involuntary incarceration towards occupational rehabilitation of the past fifty years appears to have somewhow bypassed Gotham. No one seems to get their meds right in Arkham. You might wish to know what the problem is with the facility director – according to the comic book arc “Batman: The Last Arkham”, administrator Dr Jeremiah Arkham regrettably suffers from delusions that his mentally ill patients could potentially integrate into society.

The irony is so thick you could cut it with a Batarang. What we should worry about is how its readers process this information – and have been doing so for 70 years.

It’s a shame therefore that one of the most interesting fictional creations the comic book world has created seems to have such a problem with psychiatry. It’s potentially understandable given Batman’s origin story – arguably, he would lose all of his powers if he ever underwent appropriate grief counselling. In the meantime, I gain some solace in that the patients I see are far more interesting that any character in a comic book. At least temporarily. They get downright boring when they’re cured.