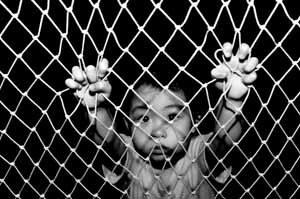 It is difficult to maintain a consistent attitude, as a nation, to the issue of asylum-seekers. The extremes of “White Australia” are long gone since its final dissolution in 1973, however there is an ongoing fear regarding our vulnerability as an island nation with prodigious wealth and social initiatives. Surely a family willing to brave dangerous conditions at sea, a trip during which thousands have died – deserve at least respite from whatever hell they must be escaping? And surely a person willing to employ these shady entrepreneurs to clandestinely enter our lands must have something to hide?

A mountain of evidence prompted the Royal Australian and New Zealand College of Psychiatrists to release a position statement In February 2012, where they noted “mental distress in varying degrees was a common manifestation in detained asylum seekers.” “Of particular concern is the stress caused by an uncertain future; refugees and asylum seekers held in detention are unable to make future plans and can feel stressed and powerless.” This is the culmination of years of research, such as Newman and Steel’s 2004 study identifying threefold increases in psychiatric disorders in adults and tenfold increases in children, after detention.

Post-traumatic stress and major depression were the most cited conditions that are found in these studies. Associate Professor Sundram in May 2012 even felt there was an entirely new condition, “Prolonged Asylum Seekers Syndrome” secondary to lengthy detainment with repeated rejections. His writings bring to mind many of the initial descriptions of PTSD, which noted to be closely related to the community rejection veterans experienced after returning from an unwanted war.

In terms of their mental health access, the situation is now better, although still uncertain. I regularly now receive job offers for work in detention centres, and many of my colleagues have answered the call to provide care to those who most need it. They’ve told me the reasons why they’ve done so, and for many the reasons seem similar to why other colleagues have signed up with “Doctors Without Borders”. The irony doesn’t need elaboration.

There is, however, an odd sensation to being a government-funded clinician assessing a government-detained individual for a government-induced condition. Again, many of my colleagues utilise the defences they’ve learned in regular practice, do the job and carry on, finding what coping mechanisms will allow them to deal with the traumas experienced on the next flight out, or the burnout from the framework they’re forced to work in. Some though have admitted privately that their approach is to diagnose what they can so as to assist in patients being transferred out of the facility. As one advised me, “The only thing that can get them better, is to get them out of there. What else can I do?”

This was well before Dr Peter Young resigned in frustration in 2014 as director of mental health services for International Health and Mental Services, which provided psychiatric support by contract to detention centres.

Psychiatrists and governments have had a long and severely checkered past. The then-Soviet Union’s expulsion from the World Psychiatric Association in 1977 followed systematic use of psychiatric detainment for political dissidents, and extensive similar issues have been identified in China. These occurred after years of moulding clinicians to the point that many accepted the protocols that they followed as logical courses of action. There are seemingly earnest case reports in the literature advocating with absolute certainty that there is indeed a form of virulent psychosis secondary to practicing Falun Gong exercises, that requires mandatory hospitalisation and enforced medication.

Of course, one cannot pretend that the Australian government would instruct its psychiatrists to detain asylum seekers – it does not need to. However one also cannot pretend that the solution to the vast mental health crisis is the employment of more doctors. One must treat the cause, not treat the symptom. And the issue that needs to be resolved, is how we feel as a nation about a person who is willing to brave the process of seeking asylum and detention. Once a consistent approach is identified, the matter will be solved.