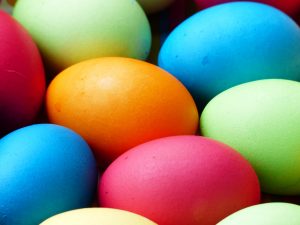 The Easter bunny’s origin has been thought to be related to an ancient motif of three hares found in sacred sites throughout Europe and the Middle East. Thought to be a symbol of the Trinity, it is an essential doctrine of modern Christianity. Like many religious holidays, its origins are in dispute and considered to be of declining significance, given the overall decline of religion in Australia. According to the National Church Life Survey, monthly church attendance declined from 44% in 1951 to 17% in 2007. The 2011 census had 22.3% of Australians describing themselves as having “no religion”.
From a mental health perspective, this is a bad thing.
Religion and psychiatry have always had a strained relationship, ever since the French neurologist Charcot in 1882 first connected religion to hysteria, and Freud’s extensive writings on faith as an infantile defense. A 2004 study of UK psychiatrists found 54% believing in God, as opposed to 71% of their patients. It has long been the position of psychiatry, and arguably still is for the bulk of its proponents, that humanity would be better off without religion.
Despite this, there has been an increase in literature over the last ten years describing the positive relationship with between spirituality and mental health. Shaw and colleagues in 2005 conducted a systematic review of 11 studies to find a consistent benefit in the setting of trauma – in that religious belief was usually were beneficial in the aftermath of trauma, could be deepened after trauma, and had several features associated with posttraumatic growth. Seeman and colleagues in 2003 found multiple biological pathways linking spirituality to health, including lowering blood pressure and superior immune function – benefits particularly seen with meditation. Strawbridge showed in 2001 that regular attendance at religious services had improvements and maintenance of mental health, especially depression – as well as physical health markers, such as reduced smoking and increased physical activity. The news is not all good – the most consistent evidence regarding the deleterious impact of religion lie in what is referred to as “negative religious coping” – the tendency for individuals after a serious trauma, to express “Spiritual Discontent”, a ‘reappraisal of God as a punishing force, or a reappraisal of God’s powers altogether, or pleading for direct intercession’ (Pargament, 2000).
In that case, what are the elements of religion that lead to the benefits? A comprehensive study by George et al in 2000 found a number of components that were associated with improved health – and several that were not. They wrote, “The 3 mechanisms underlying these relationships involve religion increasing healthy behaviors, social support, and a sense of coherence or meaning.”
So, if you have a formalised religious position, the evidence suggests that you’re more likely – although not guaranteed – to enjoy superior mental health, and better able to weather life’s discomforts. But these may not exclusively be the domain of the Protestants, or the Jainists, or any other named religion – maintaining a healthy lifestyle, a connectedness with your fellow human beings, and maintaining a sense of meaning is what is necessary. That last component is probably the most fundamental challenge facing any human being – religious or not.
It’s therefore reassuring to know that at least once a year, it’s probably possible to achieve all three components with joining the kids on an annual Easter Egg hunt outdoors. There may be several reasons for ritualistic observance, or there may be none. I personally suspect that, at the end of all things, it’ll make sense, even if it doesn’t right now.
In the immortal words of Amanda McKittrick Ros, “Dear Lord, the day of eggs is here.” You may not ascribe to the concept of the death and resurrection of a deity made human incarnate. But it’s nice to know that you still get the chocolate.